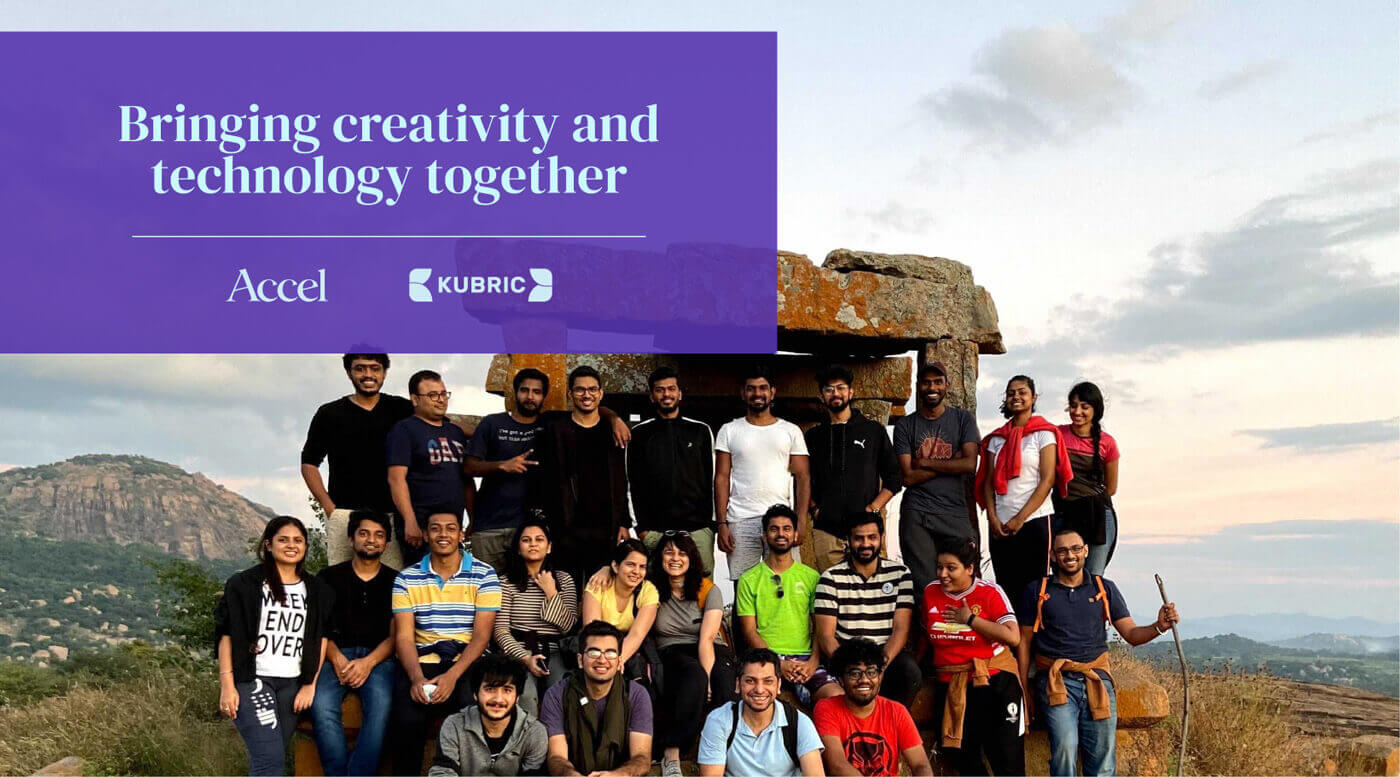 #
:
Kubric: Bringing creativity and technology together
Mins Read
10 Mins
You can also listen on

It was their love for content that brought Kaus and Barry together to launch Kubric. The two met at Myntra almost 5-6 years ago at a time when the platform was moving towards content-driven commerce. Kaus’ inclination towards  creativity and Barry’s passion for engineering made them realize that the combination of their expertise could lead to the creation of something powerful.

They started their journey with podcasts. Barry, being an avid podcast listener, wanted to start something in the audio content space. Kaus was drawn to  it due to her proclivity towards all things content and the two got together to launch a podcasting platform. But 2017 still seemed too early for audio content platforms to take off in India. Even as Kaus and Barry worked with publishing houses to provide  podcasting services, the publishers were more inclined towards seeking video content services: converting their articles to videos, GIFs, and into other easily-consumable forms.

“That was the ‘aha’ moment for us because people who were paying us for audio were more interested in visuals. And we remember that at Myntra too users always responded much better to video,” recalls Kaus. “This was the trigger for us to start thinking in a different direction.”

‍As the two founders realized that podcasting wasn’t working, they knew they had to pivot quickly. This is where Shamik Sharma came into the picture — who became the link between Accel and Kubric. He was running an incubator program for Accel at the time and was looking for interesting ideas. Shamik asked the two of them to join the incubator and tinker with their pivot. “We felt that video was the right medium but the solution itself required some sort of refinement,” says Barry.

After three months of research, brainstorming and an initial product, Kubric presented their idea to Accel. “It was on November 21: I still remember the date,” smiles Kaus.

Their primary idea was to bring programmatic ability to content creation. Barry explains it well: “The world of coding has developed practices on how to maintain code, change code, author code, etc. But these practices haven’t percolated to the content world. This thought of marrying a powerful editor with code was the initial genesis of the idea, starting with video.”

This formed the initial hypothesis . The Accel team liked the idea and believed in the founders. We at Accel realized that their product could potentially have several applications in both large & small teams and wanted them to pursue it further.

“When we first met Accel, we were still proof-of-concept & pre-revenue. But all our conversations with the team were focused on the problem and the path to building a great product to solve that problem,” says Kaus. “Accel's early investment in our team and our vision rocket-fuelled both my co-founder and me into this exciting roller coaster of two-and-a-half years, armed with ammo that our 'crusade' matters,” says Kaus.

Armed with support from Accel, the next step for them was to reach out to potential customers. They spoke to all e-commerce companies in India and one of their initial pilots was with Myntra, given their connection with the company. Kaus travelled to the US and South East Asia — meeting the marketing and content teams from DoorDash and Uber to Grab and GoJek. This helped them find deeper insights to define the problem they wanted to solve.

It was difficult to create content at scale and fast. And then distributing this content across platforms based on scale and ratio wasn’t an easy task either.

“These are e-commerce companies whose storefronts are distributed and content has to be shared across apps, websites & social media. A large number of people had to collaborate on creating content, but not all understood the creation tools,” says Barry. “It also did not allow esharing of knowledge or adapting the content for multiple platforms.”

The problem seemed massive with fragmented tools not talking to each other. Kaus shares an interesting anecdote from her initial interviews with customers which further solidified their thesis on the enormity of the problem.

“When I visited the GoJek office, their team told me that they had 600 people across different locations just for their entire content process,” recalls Kaus. “I thought that was a crazy number! But it also explained how important it was for them to put up visual content and that it was making a big difference to their growth that they were willing to put up such a large team for it.”

With companies wanting to send constant visual communication to their users on a day-to-day basis, they have to set up large processes, teams, use multiple tools and Kubric founders knew that they could solve for this using tech.

This was in 2018. The founders got down to work based on the insights from their research and launched an Alpha version of their product. After running pilots with some companies, Myntra became their first official client. Since then, their product has been used by e-commerce companies across Asia including well-known Indian names such as Swiggy and Flipkart. In fact, during the most recent Big Billion Days (BBD) sales, Flipkart used Kubric to create over 1.5 lakh creatives.

Meanwhile, Kaus and Barry continued to interact with their customers. This led to a realization that while their product was solving for the team, it wasn’t doing the same for its individuals within the team. This led to the next iteration in their offering.

“We were already providing tools for teams to take mundane marketing material and customize it,” says Kaus. “But now we were thinking of how to give people the ability to do this on their own.”

They worked on creating a new generation of tools that not only works for large teams but also for people within those teams by connecting them with each other. “The need for content creation is effectively the need for expression. These visuals augment the ability to express. And the previous era doesn't work anymore. We wanted to break that barrier,” says Barry.

With this new version, individuals will not have to think about the different tools — for creating, editing, design and others. Currently it’s in Alpha with 2,000 users across North America.

Why Accel invested in Kubric

During my days at IBM, we used to build tools that bridge the gap between the business and the technology departments. Those days, the engineer would take the idea and implement it using Java or C++, but the person from the business department would talk in terms of objects in the system, interactions and the visibility rules — more business domain specific. There was this gap and mismatch in their understanding of each other.

There is almost a parallel of it that I see here in terms of the marketers and the designers. Marketers focus on the messaging: what does my customer want? Whereas the designer focuses on the aesthetics of the message. How does one create a language where both parties can interact and actually understand each other. We believe that’s where Kubric plays a significant role.

I am glad that we came in very very early with Kubric and the relationship has only grown stronger since. We believe that it helped us form a unique perspective on the team & business and has given us the ability to help with their product directions as well as thinking through their GTM as they changed course.

We were convinced about Barry and Kaus from the beginning. Barry has a strong sense of product and his articulation of the vision during our meetings was impressive. Kaus, on the other hand, had a deep understanding of the market and recognized the pain points. The Accel team thought it would be a powerful combination of someone who has the knowledge of what’s going on in the industry and the other being able to articulate well on what we need to build.

Kubric’s initial idea was to build something in the video content space. Since then they have iterated a couple of times, last one being an AI-enabled service model — but in less repeatable situations. In order to build a truly scalable outcome we have now emerged on the journey to create a self-serve platform wherein marketers could use it to create and communicate their ideas. Kubric will soon launch a new version (currently in Alpha with 2,000 customers) where team members can create content without the assistance of a designer or a service component from Kubric. Another upside to this: it allows Kubric to go global.

We are excited to move into this next phase of Kubric and watch the company grow its presence into geographies beyond Asia. We wish the founders and the team good luck.

1. Welcome to the Startup Pulse Survey by Accel!

Home
Content Hub
Podcast
Jobs
Search
Thank you! Your submission has been received!
Oops! Something went wrong while submitting the form.
Subrata Mitra