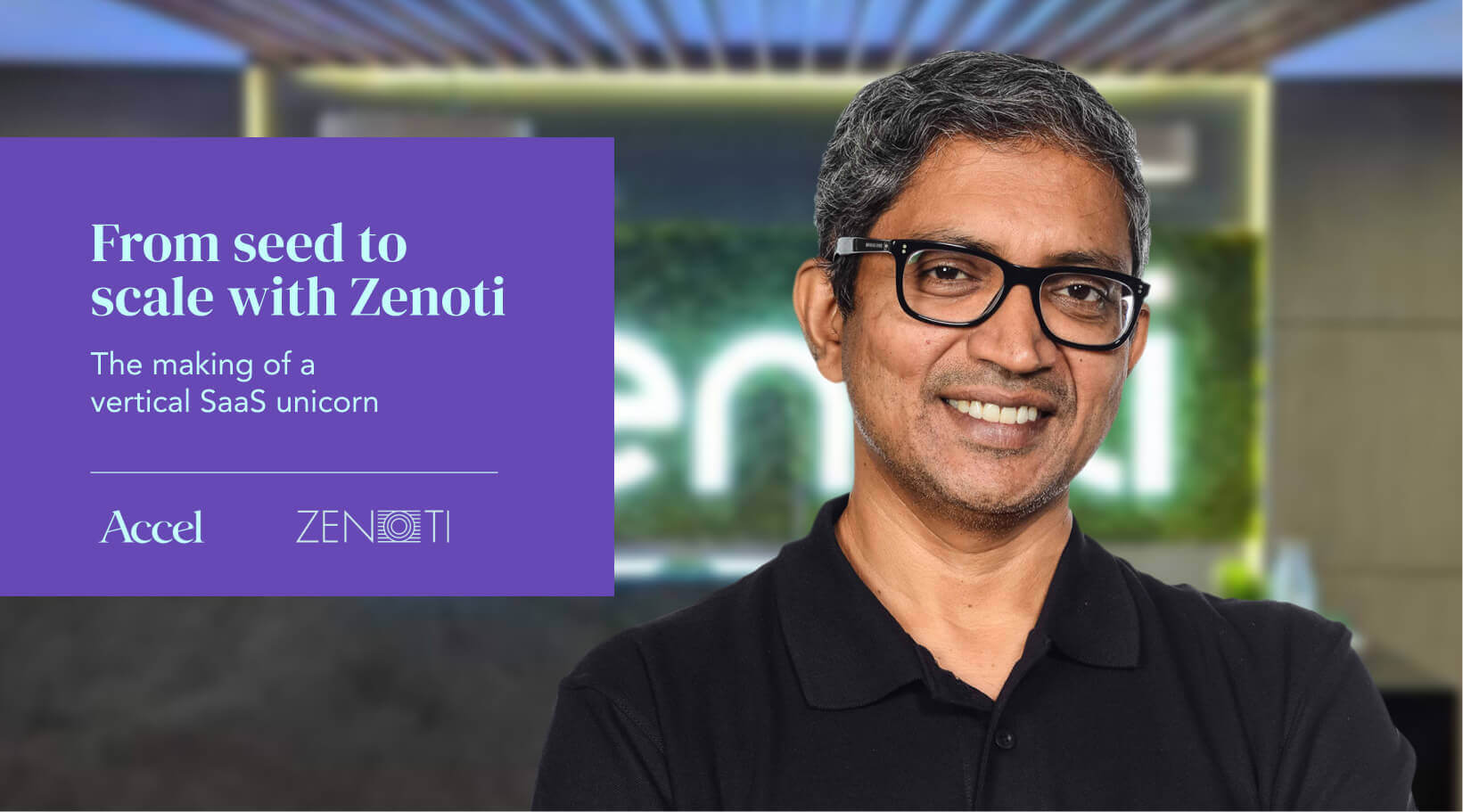 #
:
From seed to scale with Zenoti - The making of a vertical SaaS unicorn
Mins Read
8 Mins
You can also listen on

A couple of months after the pandemic hit the world in 2020, Zenoti found itself in a bit of a situation. The world had changed very fast. Though the pandemic’s effects were not yet affecting their existing business in any major way, their customers were badly hit. Spas and salons across the developed and developing world had no customers. And no customers meant that they couldn’t pay their employees. CEO Sudheer Koneru’s executive team and employees were hearing stories of how hard-working people connected to them were unable to make ends meet.

As it happened, Sudheer and the team had just created the Zenoti Foundation, a charitable non-profit organization dedicated to helping employees and their families tide over tough times and unforeseen challenges. The foundation swung into action, creating a specialized COVID 19 Grant program for their customers worldwide, and distributing over $250,000 of financial aid to around 500 beauty & wellness professionals in the United States, Australia, India, the Philippines, and Indonesia.

There’s a video of some of the grant recipients thanking the company and its program, and you can see what it means to some of them: That a company whose software they use cares enough about them to offer them help in such times.

And here’s the most important part of this story: A significant amount of the funds for the grant program came from Zenoti’s employees themselves, who gave part of their salaries to the foundation. Not once had the company asked them to do so. The team gave because they wanted to.

This is the company and the culture that the leadership team at Zenoti have built.

Our association started with Zenoti started 5 years ago, when they were known as ManageMySpa, with a small office in Hyderabad.

This week, Zenoti became a unicorn.

We have written about Zenoti’s journey before, in which we documented the story of Zenoti’s rise.

In this article, we have tried to highlight how Zenoti made the right strategic decisions on its way to becoming a global SaaS leader in the wellness industry.

But before we get into that, there’s a wonderful story of serendipity to be told.

How Zenoti was born

In late 2014, Abhinav Chaturvedi, then a young associate at Accel, went for a haircut at a place called Enrich in Jayanagar. As he realized how smooth the checkout experience and the product they seemed to be using was, he got curious, and asked them about it.

It turned out to be a company called ManageMySpa, headquartered in Hyderabad. Abhinav immediately got in touch with Sudheer, and after a couple of conversations, convinced me to fly to Hyderabad to meet the team.

The first thing they told us was that they weren’t looking for money.

Sudheer was already a seasoned founder by then. He had started his career at Microsoft, working there for 8 years before starting up his own company called Intelliprep in 2000. Intelliprep was acquired by Click2Learn to form Sumtotal, which Koneru helped grow to $100 million in revenue.

His next venture was a wellness chain called Latitude Pro, and it was when he was running this that he realised that operational management and administration for spas and salons seemed to be a huge problem. As the issues piled up: scheduling, management, staffing, people, cash, collection, Sudheer started thinking that there should be a better way to do this. He tried finding software and realised none existed.

That’s when Sudheer had the brainwave: Why are we running this wellness company? We should be making software for this space. This was the idea that became Zenoti.

But the idea itself is never enough, isn’t it? What made Zenoti’s success possible was a series of decisions. I get into them here:

When we met Sudheer, Zenoti’s revenue was very small.

Remember, the name of the company was still ManageMySpa.

Our work started right there: Let’s go look at the market, we said. At the time, the team was thinking about only the Indian and South East Asian markets, and considering Australia as well. When we did our joint study of the addressable market with Zenoti, we realized that the American and European markets also had an opening for a product like ManageMySpa and secondly, that the same product would work in those markets. We only had to get GTM right.

Sudheer and team immediately decided that it is worth going after the US market first, before tackling the European market, at the same time not ignoring the Asian market.

Within 30 days of our investment, which was the first institutional cheque for Zenoti, their Head of Sales, Dheeraj, moved to America.

Yes, the decision was to go global.

Strategic decision 2: Keep it to spas and salons, or expand beyond it?

One of the first things we realised was the adaptability of the platform Zenoti had built. With minor changes for different use-cases, it worked for everyone in the wellness space - spas, salons, medi-spas, nail salons, hair spas, even tanning parlours. There was significant forethought in how they had architected the product.

As ManageMySpa started picking up the pace in the US, they came across sub-vertical markets, such as nail salons, barber shops, tanning services, and so on.

If they had had to build products for each of these verticals separately, it would have been impossible to address them.

But thanks to their scalable product architecture, they realised they could do so. It was relatively easy for the team to make the product work for each vertical, almost as if it had been purpose-built for them. They saw the opportunity, and doubled down on many adjacencies like these quickly. This was also the time that they needed to rename the company, and move it away from just the spa connotation.

They quickly landed on the name Zenoti.

With a new brand and good early traction in the US market, Zenoti raised more money from Norwest, and later from Tiger Global.

As they grew in the US, the Zenoti team had to make a decision, and fast. They had to choose between taking a slightly easier path to growth - go for the low hanging fruit, and scale from there, or to invest in the brand and product, and go after some of the tougher enterprise customers immediately.

This was a critical call because one of the nuances of the US market is that references are important: By having a bigger, recognisable brand use your product, there is more receptivity in the market. This was definitely the case in the wellness industry and this was why Zenoti decided to go upmarket. It immediately become easier to sell to mid-market customers, because Zenoti was already closing large customers.

Make no mistake: This was difficult to do, as they would have had to work harder to succeed in this cohort.

They could have been forgiven for taking the easier route: Go after the easier customers.

They did not. They spent a significant amount of time working on the brand and a superior product experience. This decision slowed them down, and it was time they could have used to just accelerate what was already working.

But in going up-market with larger brands and learning how to support them, Zenoti gained valuable real-world experience which strengthened the product, and the product team’s capabilities to respond to market demands.

And as the wellness industry is a close-knit world that uses a lot of signals in terms of referencability, Zenoti’s acquisition of marquee logos like Mario Tricoci, Toni and Guy, Rush Salons and Hair Cuttery meant that the resulting credibility enabled them to get more enterprise customers. These are massive brands in the US and getting them as customers help them to go after a lot of customers in the US.

As Zenoti understood more of the challenges being faced by customers, Sudheer and team realized the massive opportunity they had in front of them. With so many existing customers and their usage data with them, they could build multi-product solutions for more specialised use-cases so customers don’t have to integrate and use many other products.

But they also didn’t get too ahead of themselves. They decided to start looking at multiple products when they had a significant number of customers, and there was enough demand and existing revenue: In this case, only after their ARR was already around $10M.

This resulted in a fresh burst of action at Zenoti. The team added additional products such as smart-marketing, employee engagement, analytics, and most importantly, integrated payments. They are continuing to innovate on these lines with additional smart tools like AI-enabled scheduling engines and so on.

It is this speed that remains their signature, and they extend it to the product and implementations too. For example, the popular chain Toni and Guy went live with Zenoti in over 600 locations within 45 days, with barely a complaint.

Strategic decision 5: Go after consumer or keep it B2B?

One of the ideas that Zenoti also had, and actually worked on was a consumer product for people to book slots and appointments at nearby salons and spas. This product was ready, Zenoti had tested it with a set of customers, and it was close to launch. But Sudheer and team then decided not to pursue it, as they felt they needed more customer density in these markets to make it work. They decided to focus their energies and resources on their original B2B product.

Today Zenoti is being used in more than 15000 locations worldwide. The expansion to North America is now being followed by significant growth in the UK, Netherlands, and South Africa. The company intends to increase its footprint in Europe next year.

The churn, relative to other similar businesses, is extremely low, as the software is sticky and easy to use. And the growth is almost automatic - as customers succeed and open new locations - Zenoti keeps growing too.

All this means that Zenoti is arguably the first big vertical SaaS company from India. The product is easily the best in the category, and their successful large scale deployments make it easy for enterprise-scale businesses to choose them.

From Accel’s perspective, it has been gratifying to see what Sudheer and Zenoti have been able to achieve. There are enough lessons in their execution to fill a book, but we wanted to draw attention to one particular aspect of Zenoti’s organisational culture and leadership: Fast decision making, which has helped them to gain momentum in the wellness market.

We are delighted and take pride in being their partners from the seed stage. There’s so much in this seed to scale journey for early stage founders to learn and apply in their journey as well.

Home
Content Hub
Podcast
Jobs
Search
Thank you! Your submission has been received!
Oops! Something went wrong while submitting the form.
Shekhar Kirani