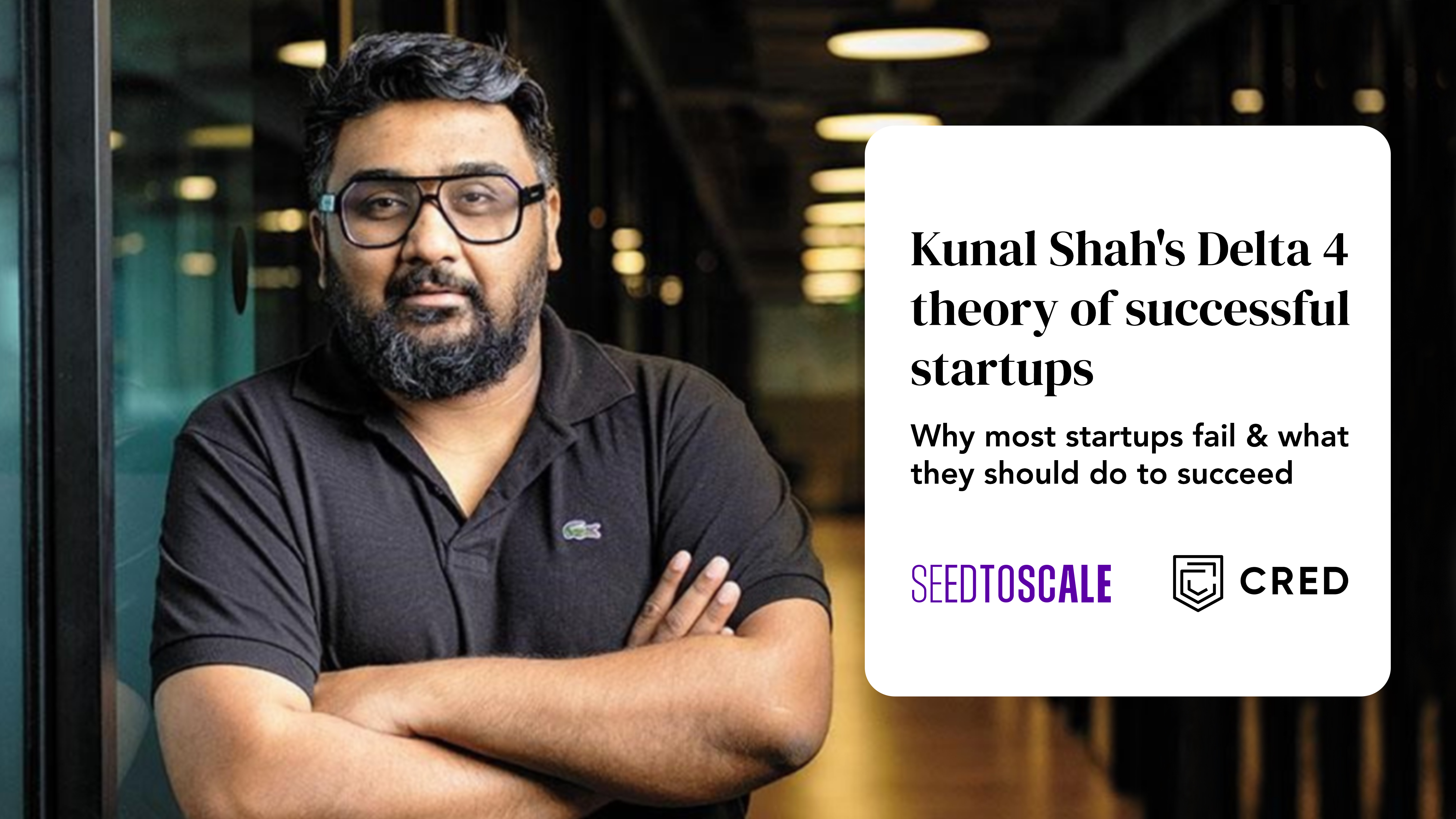 You don’t need a brief profile of Kunal Shah, but I’ll give you one anyway.

First, it shouldn’t surprise you to know that Kunal Shah was a student of philosophy in college. And then he dropped out of his MBA from Narsee Monjee, going on to start and exit numerous ventures.

That experience helped when he started up Freecharge in 2010, and later sold it to Snapdeal for what was then, and still remains one of India’s biggest acquisitions.

After the exit, Kunal had time on his hands.

So he sat down and spent some time tinkering around the problem of why a majority of startups fail. ‍

The power law in Venture Capital‍

The more Kunal dug, the more he had to unpack the amount of personal pressure, trauma, loss, and depression an entrepreneur has to go through when his or her startup fails.

And he studied venture backed companies, he arrived at these conclusions:

Take the data from any spectrum of startups and any industry, the power law distribution stands very clear. However, it also implies that a majority of these startup investments turn out to be failures. As much as there is plenty of excitement around building new businesses, the hard and real truth is that at least 90 percent of startups fail.

While analysts, principals and all other folks in VC are okay with these few designated business failures in their portfolio, the entrepreneurs building these businesses cannot be.

As founders know, building a company is so fragile and critical that it is almost equivalent to raising a child.

So how do you gamble with it? You just can’t.‍

So why do most startups go bust, if founders aren’t ready to give up that easily?

The usual suspects for answers would be lack of product-market fit, weak founding team, bad organisational culture, inability to capitalise on market opportunity, incompetent product capabilities, and so on.

But on a fundamental level, as Kunal posited, businesses are supposed to be creating wealth. Whether it is for founders, or stakeholders like investors, and employees, a successful business is something that continues to create wealth across all fronts.

Drawing parallels between energy generation, consumption and entropy, Kunal arrived at his own theory of why most startups fail, and his foolproof formula that constitutes for a successful startup.

The idea that Kunal arrived at was that a new product, in terms of its efficiency score and its ability to drastically change a consumer’s behaviour, should practically replace the existing product being used by the market.‍

“Efficiency score simply refers to energy required to create more energy. In business terms, it is revenue required to create more wealth in a company. One way of calculating the efficiency score is the total number of users that have started to use a new product in that market segment divided by the number of users that stick around after a certain period of time.”‍

Let’s compare Swiggy and the old model of ordering food.

Back in the day, you’d have to follow these steps to get something delivered to eat:

When Swiggy took over, a click or two on the mobile app would add the items to the cart. Another round of clicks would place the order. Delivery fee is largely non-existent, and payment is made online.

As the consumer gets habituated to using these apps, the probability of him or her going back to orally placing an order through a phone number is, well, non-existent.

Now, assuming that the consumer would rate a 9 for the Swiggy experience and a 3 for the old way of ordering, Swiggy wins by a difference of 6 between both the behaviours. If one were to do this exercise across any spectrum of products in any industry, the new product that gets ahead by at least 4 points or more is going to be the trump card of that particular market.

According to Kunal Shah, the new products that fall under this Delta 4 category, are the ones that are going to create wealth for a startup.‍

“Once the user experiences a significantly better way of using a product, there is no way he or she is going back to the old way of doing things.”

What does this mean for startups?‍

If a product can move people and their behaviour from point A to point B in the most efficient way possible, the product is bound to work.

When this happens, it needs to unlock a few things. Let’s see this through the same example.‍

Once a user starts using Swiggy, it is impossible that he or she goes back to ordering via telephone

If Swiggy is down, the user waits until it’s back online, but would not venture back to the old model.‍

Humans love to brag about a new exciting product that they are using, to other humans who have not discovered it yet. This phenomenon becomes so prominent that it ends up being more important than the product’s own USP.‍

Another example of the Delta 4 theory‍

When WhatsApp was going through its entire privacy conundrum recently, another private messaging app Signal was speculated to be its replacement. End-to-end encryption, guaranteed privacy were among the propositions, and it did seem like the end of WhatsApp, at least according to social media chatter.

But as it turned out, WhatsApp continued to dominate, and Signal only became a subject of conversation. Kunal says Signal does not activate Delta4 enough to replace WhatsApp entirely. Privacy is a concern only to a limited percentage of users, while a major chunk of WhatsApp’s user base do not actually care about their data.

Kunal says, “Besides, the network effects that come along with adopting an entirely new product like Signal, for the same desired usage, demand for plenty of activation energy. A 55-year-old housewife or a 50-year-old vegetable vendor in India, would need to spend a lot of time learning how to use Signal and migrate over to the platform.“‍

If Signal was to replace WhatsApp for an entire market in terms of consumption and usage, the Delta has to be equal to or more than 4.‍

Figure out your Delta 4‍

This article is based on a talk Kunal gave for the Seed To Scale program at Accel, organised by Siddharth Ram, entrepreneur in residence at Accel, and moderated by Pratik Agarwal, partner at Accel.

Kunal’s Delta 4 theory is a great way to think about your product and how much it improves the customer experience over what the alternative provides, whether it be another product or an old way of doing things.

We hope it gives you a framework to think through what you are building and make sure it’s ready to take on the world.‍

Blog
A guide to hiring great engineering leaders at a startup

Do not delete this container
GeneralStartup Journey