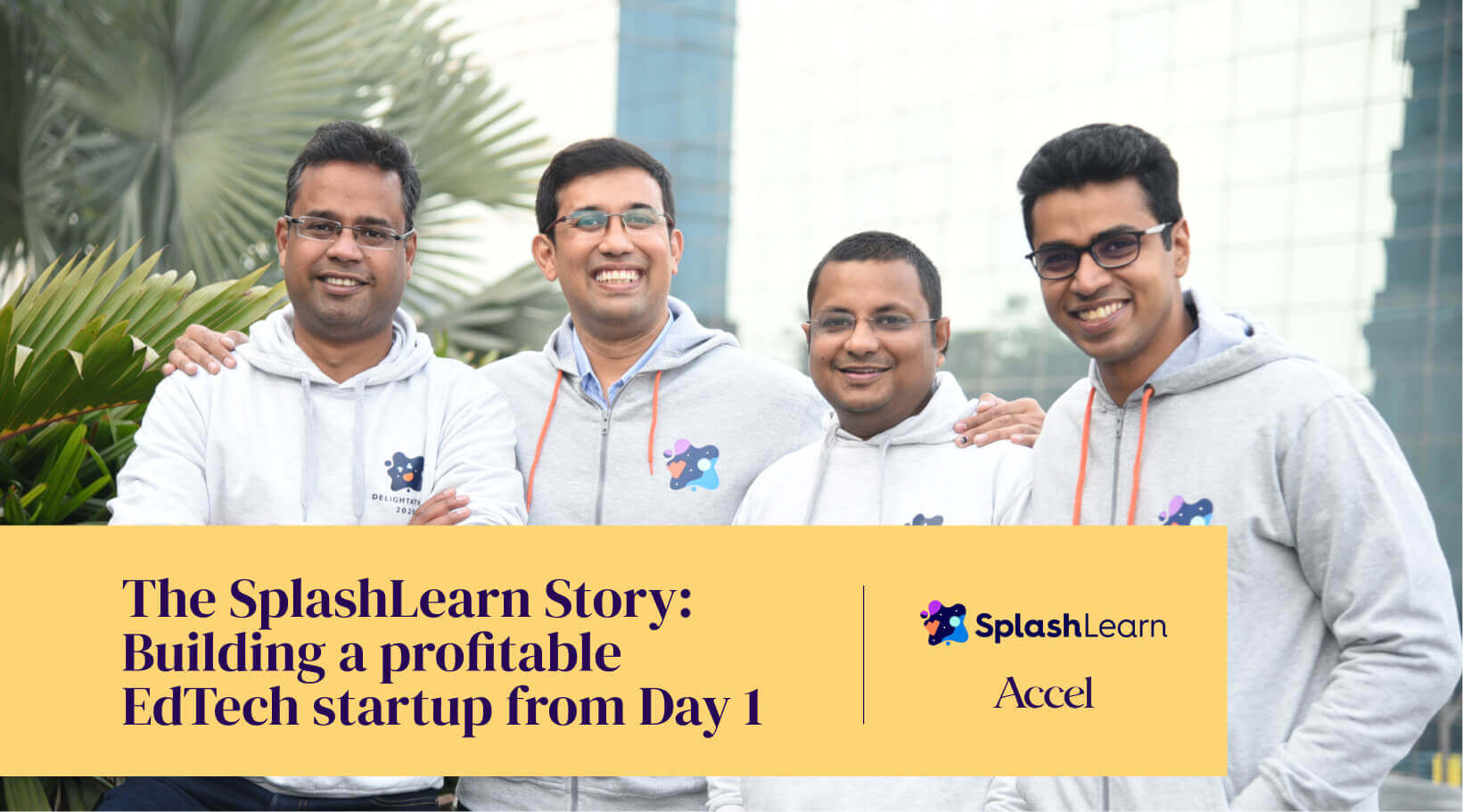 #
:
How to Build a Profitable EdTech Startup from Day 1 - The SplashLearn Story
Mins Read
20 Mins
You can also listen on

For almost a decade now, Arpit Jain, CEO of SplashLearn, wakes up and checks online reviews of the product. He has a channel on his phone that collates these reviews which he then reads every morning. Customer satisfaction is of utmost priority to SplashLearn: an edtech company that has spent the last 10 years building engaging products for both after-school learning and in-school learning. And reviews and anecdotes from parents, teachers, students and schools are the best way to know if the customer is happy or not.

And this is just one such story that illustrates how Arpit, and by extension, SplashLearn think.

From the first time I met Arpit, I knew he wasn’t a regular founder. He was different in every way — right from the way he built and grew his company with their own profits, to the metrics he focused on, and to the team he built. And during my consecutive meetings with all the founders, I realized that all of them were very very smart, thoughtful, humble and detail-oriented. To say that I was impressed, even in that first meeting, would be an understatement.

I also realized that they were serving international customers sitting out of Gurgaon and that their product was engaging and fresh. I thought to myself that if this works out, it could potentially be the first global consumer company built in India. While we have large SaaS companies built in India for the global market, this could be the first global consumer startup.

Accel wanted to be part of this journey.

The Road to Starting SplashLearn

Arpit’s tryst with EdTech isn’t new. Nor is his entrepreneurial bug. Around 15 years ago, when he and the other founders were still students at IIT Kharagpur, they wanted to make the courses available online for everyone to access it. This was pre-Coursera days. They coded for weeks and came up with a platform that would not only allow someone, say, sitting in Jaipur to be able to access an IIT Kharagpur course, but also for someone on their campus to be able to take an IIT Bombay course.

As the platform took off, Arpit and the other students decided to focus on their business full-time soon after graduation. “We did not sit for placements — in fact we were one of the first ones to take the deferred placement program at IIT, which was just launched,” recalls Arpit. They ran the company for three years, sold their product to 100-odd colleges, but realized that internet penetration wasn’t as deep at the time and driving adoption became a challenge. They shut down the company in 2010. But they knew there was scope to use tech and improve the education system.

Their first startup experience made the group of founders realize a couple of things:

They moved their gaze to the West and realized that the US market was just starting out with iPads — a multi sensory device which was deeply engaging for kids. They decided they wanted to start something with the iPad as a platform — creating fun, challenging content for kids which could be engaged with using the iPad, as opposed to the monotonous text-based learning through books.

This was the ‘eureka’ moment for SplashLearn.

The idea was clear, but this time they wanted to spend time researching and getting to product-market fit, which wasn’t clear in their first venture. “In our previous company we did not do any research at all, and just built a product based on what was happening then, and the problems we were facing” says Arpit. “We did not want to repeat that mistake.”

The five co-founders of SplashLearn headed over to the US for their market research. They sat outside multiple coaching centres, spoke to parents, kids, visited schools and spent time with teachers to understand the kinds of problems they were facing, and how they could make a difference. Their initial idea was to build a product for Science learning because of the nature of the subject being more practical, but their on-ground research pointed them in the direction of Mathematics. “We realized that in elementary schools in the US, science wasn’t a big focus, it was either Math or language learning,” explains Arpit. And being computer science students themselves, their love for Mathematics came naturally.

After gathering their notes, they scouted for some initial capital and kick-started their company in late 2010. The team then launched their first product in April 2011: a game-based learning app for grade three which would replace books and worksheets.

Since it was a paid app in the App Store, SplashLearn saw money flowing into the company from day one itself.

“We got some $500 on the first day and it was really exciting to see how many people are purchasing our app,” says Arpit. Since then, the founders used their revenue to run the company and did not seek external capital at all.

Until Accel approached them in 2017.

Accel’s investment into SplashLearn started with me perusing a random list of companies three years ago. In that list, SplashLearn’s website traffic numbers and their product offerings really stood out to me. So I decided to dig deeper.

One of the Accel analysts, Shruti Ghatge (now Co-Founder at Zomentum), at the time was also from IIT Kharagpur and she knew about them primarily because of the learning management system they had created during their time at IIT, which was being used for a while even after they had graduated. I was intrigued and wanted to know more.

I met Arpit in Gurgaon. I was surprised to know that they have actually been bootstrapped and are, in fact, profitable. Even though they weren’t looking at investment then, we both kept the conversation going. By the time the Accel investment happened, it was almost the end of 2017.

But there was a problem: It took longer than expected to close the transaction, because of structural issues, and during this time, the company  grew at a rapid pace: revenue had doubled, the team was growing and they moved to a much bigger office. The valuation we agreed on in the term sheet didn’t really hold.

At Accel, we did not want the founders to feel like they were being taken advantage of and decided to invest more money while keeping the same ownership, thereby increasing their valuation of the company. I remember how surprised they were when we told Arpit this.

“This was a great gesture from Accel. You don’t hear of such stories from other investors,” says Arpit. “Accel quickly realised that founders might have some discomfort considering that the numbers have grown significantly since the day term sheet was finalised. They didn’t even think twice before raising the valuation and investing  more money so as to ensure that we’re comfortable.”

One of the first things Accel does when we invest is a company is to look at the team heads — if the startup has the right product head, design head, and engineering head. That was sorted with SplashLearn. The second aspect we focus on is the go-to market side. When we became the company’s first institutional investors in late 2017, SplashLearn had one distribution channel — the app store where parents could pay for and download the app from.

Then they had an enterprise vertical where they were selling software to teachers — which was bringing in around $1.5 million in revenue.

However, as we discussed further, we realized that this approach wasn’t scalable. We suggested that they shut down the enterprise vertical (despite the revenue) and provide the software for free for the teachers. The idea was twofold:

It was a difficult decision for Arpit, but I knew that he would weigh it carefully. He is a very mathematical and analytical person by nature, and needs to picture the equation and have it make sense for him. It did, and so that helped him take the decision of shelving the enterprise vertical entirely.

Lessons from bootstrapping a startup‍

The founders of SplashLearn raised $100,000 on their own to launch the company and then bootstrapped their way for the next seven to eight years. With bootstrapping came ways to be frugal and smart. Instead of spending large sums of money on marketing, they spent time figuring out growth just through App Store marketing and web SEO. This helped them in the long run.

“It was very important for us to be frugal and to figure out channels which can give us organic growth. These are sustainable and can help us last long term rather than just spending money to get short-term growth,” explains Arpit. This is why he believes they have been profitable for almost seven to eight years.

All this while, however, their app was available for a one-time annual purchase rather than a subscription. And around 2015, the team decided that they wanted to venture into the subscription model with the difficult decision of raising the price of the app from $10 for a lifetime use to $10 a month.

While they did lose customers, their revenue trajectory went up significantly due to the decision. This also underlined the fact that they had built an amazing product, something that people were willing to pay more for than they realised. The growth story has only grown stronger since then.

For the founders of SplashLearn, it’s been several years of frugality and holding their purse strings tight. But in the last couple of years, they have come to believe that it’s time for them to focus on growth and we at Accel agree, too.

SplashLearn has recently added English learning to their offerings and is slowly expanding across the globe as well, finding newer markets.

At times in India, EdTech gets a bad rap. But SplashLearn’s journey suggests  that it is indeed possible to build a large EdTech company from India, and for the world, no less. The entire team at Accel is thrilled to be partnering with SplashLearn to help make it one of the largest consumer companies in the world.

Do not delete this container
ConsumerPortfolio

Home
Content Hub
Podcast
Jobs
Search
Thank you! Your submission has been received!
Oops! Something went wrong while submitting the form.
Abhinav Chaturvedi