How Bizongo is Disrupting the Fragmented Packaging Market in India

How Bizongo is Disrupting the Fragmented Packaging Market in India 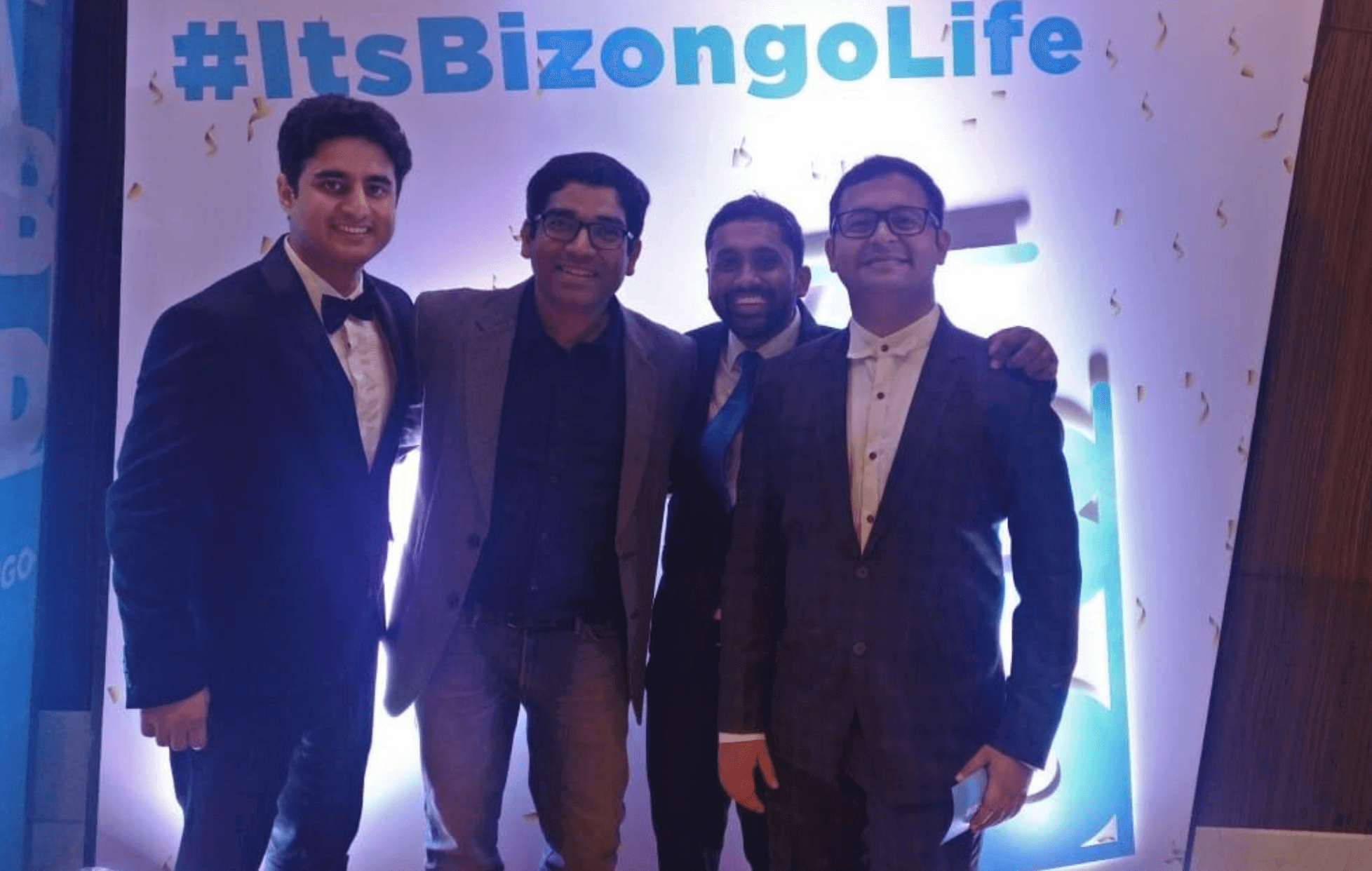 #
:
How Bizongo is Disrupting the Fragmented Packaging Market in India
Mins Read
7 Mins
You can also listen on

“Everyone needs a box, a pouch, a film or a bag to run their business. And yet the Indian packaging industry has no consensus on standardising the processes involved in selling this key product.”

You can tell by his infectious energy that Aniket Deb, the co-founder and CEO of Bizongo — an end-to-end packaging solutions platform, cares deeply about the problem he has chosen to tackle with his co-founders, Ankit Tomar and Sachin Agrawal.

It’s been a high-impact journey for the startup, from an idea that germinated in the Starbucks at Powai with the three aspiring entrepreneurs, to a business that has lived through twists and turns and a major pivot, to redefine the rules of the age-old $40Bn+ packaging industry. Bizongo now counts over a 100 large enterprises like Cadbury’s, Amazon and FirstCry as its customers. The business skyrocketed in growth by nearly 275% over the last six months, and a whopping 7000% in the last two years.

We first met the Bizongo team at the Aromas coffee shop at Powai in January 2015. Even in the early stages, the team had a marked level of clarity about the Indian market where over 500 billion dollars worth of B2B trade happens today, close to 18% of the nation’s GDP.

We saw a palpable excitement on their part to be a transformative B2B player in this booming ecosystem, an ambitious vision to build a new category-defining business, and a team with the diverse skillsets and the mindset needed to bring this vision to life. After the initial meeting in January, Accel continued to meet the team over the following months, leading to a seed investment of $650K in June 2015. Bizongo has since raised a $3M series A round co-led by Accel, and a $22M series B with Accel’s participation.

We recently spoke with Aniket about the challenges of scaling a disruptive business, and some of their crucial learnings along the way. For any founder who aims to build for the Indian market, Bizongo is proof that local businesses can see and understand the value of world-class product thinking, that they even expect it from the next wave of tech entrepreneurs.

Bizongo began as a transactional B2B platform in 2015 connecting suppliers and buyers in plastics, chemicals and packaging. With only a handpicked team of 7–10 employees, most of whom already knew the founders personally and believed in their vision, they came to a hard realisation within their first two quarters. The commodities market wasn’t consistent with their foundational tenets of being an internet-driven, sustainable, end-to-end B2B platform.

Despite having close to 95% of their revenue come from the polymers and chemicals part of the business, they also realised that they had very little control over their margins. They were sourcing commodities from large suppliers in bulk, marking them up with a small fraction of the cost and reselling them to customers online.

They saw two major problems with the commodities business:

Continuing on the path they were on would mean that they could comfortably reach revenue targets in the near future and raise funding, but they would become just another e-commerce player, banking on distribution alone. It was a hard call. But in a bold move, Bizongo chose to forego around 95% of their business a few months before their Series A.

At Accel, one of the things we advocate for in our founder network is to have the courage to take risks, to stick to your fundamentals and keep the long-term vision always in sight inspite of temporary setbacks. We backed and guided Bizongo on their decision. While hindsight is 20/20, as they say, taking the risk of doing the hard thing before you can see the benefits is a trait that successful entrepreneurship is built on. Aniket believes that taking that risk was, in part, possible because they clearly knew what Bizongo was and what they were going after.

“We were never in the end game of getting client revenue alone — that was a key driver.”

Even before shutting down two major streams of revenue, Bizongo’s team went out to discover the real problems that SMEs and enterprises were facing in the non-commodities world of packaging, where there is no readily available, finished end product. In early 2015, they spent a lot of time in South Mumbai’s famous Crawford market and the Bombay Exhibition Center in Goregaon talking to business owners. This hands-on market research gave them a crucial insight into customer needs and expectations.

Aniket recounts an experience when he met a young business owner in Andheri West. He was a computer science graduate running an oil drum business with his father. When Aniket broached the subject of an online B2B eCommerce packaging proposition, he was surprised when the man responded with, “Have you seen the Alibaba app? I use it, but whenever I open the app it looks like a Chinese virus is attacking my phone.”

Aniket had known that the app’s experience in India did not match its experience in China. But the fact that people were still using it because they wanted better apps than what was available to them locally was telling. This gave Bizongo a strong impetus to persist with their end-to-end proposition for packaging.

“It is one thing to say that Indian businesses are apt to follow age-old, traditional processes and won’t adopt best practices, but have we really given them something that is on par with global standards and seen if they will adopt it? People want better processes, interfaces and experiences. It’s up to us to build them.”

The Bizongo team made several discoveries on similar lines that Indian businesses do aspire to use tools and products that will guarantee them some amount of convenience and efficiency. Aniket strongly believes that the path to disruption lies in the Indian entrepreneurial community delivering on the promise of global standards.

The business of bringing in efficiency

According to a FICCI and Tata Strategic Management Group report, the Indian packaging industry is expected to reach $73 billion in 2020 from $32 billion in FY15. And yet, says Aniket, if you wanted to place a custom order with a packaging manufacturer today, you’re still dependent on the manufacturer’s waitlist and whims. Buyers have to chase the manufacturers, only to be told about unaccounted-for production delays and to hear that their specifications can’t be met at the eleventh hour.

When Bizongo stepped into the market, it was highly fragmented and unbranded. To provide the best experience for buyers, they needed to build good supplier relationships by showing value and providing end-to-end serviceability. Aniket says,

“You have to appreciate the fact that when existing in a marketplace where the processes are very inefficient, the only way to change things for the better is to say, ‘I’m going to handhold the supplier at every step’. Only then can you call yourself truly online because you are adding efficiency at every stage of the process.”

To build supplier trust, Bizongo offered them a trifecta of direct business benefits:

Because of the value that Bizongo can now show suppliers in terms of revenue, efficiency, knowledge and convenience, they can control their own pricing, coming full circle from the days when they struggled with pricing evolution in the commodities market. And customers get much more than just a product from the platform, where they can now manage procurement, packaging design, etc. With a total of funding of $26M till date, Bizongo is just getting started.

It is no walk in the park to break into an age-old industry. For any young startup, it’s hard to open doors and, sometimes, people may not get it. But as technology penetrates India, we do see more and more markets being disrupted by startups. And there is an increasing openness to collaborating and working with them even in traditional markets. At Accel, we handpick the startups that we believe have the promise to successfully leverage this opportunity.

Do not delete this container
B2BPortfolio

Home
Content Hub
Podcast
Jobs
Search
Thank you! Your submission has been received!
Oops! Something went wrong while submitting the form.
Prayank Swaroop