Founder and CEO of Nference 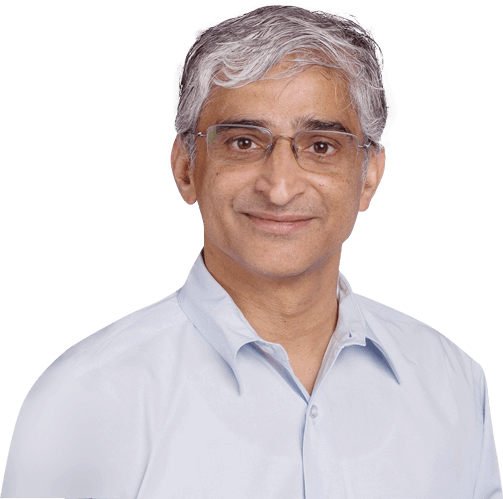 Murali Aravamudan is a serial entrepreneur, inventor, engineer and Founder and CEO of Nference, an AI-based software platform that synthesizes siloed biomedical knowledge for insights and makes it computable.

He has built, led and exited several successful media and telecom technology companies prior to founding Nference in 2015. Currently, he is also the CEO of Qrativ, a drug development joint venture between Nference and Mayo Clinic.

He holds a master’s degree in Electrical Communication Engineering from the Indian Institute of Science.

Murali Aravamudan started his career in 1989 as a software engineer in Tera Informatics. Later he served as vice president of the communications software business at Lucent Technologies and Chief Technology Officer at Bell Labs. He was a principal involved in the creation of Softswitch, a revolutionary technology for IP-based telephone networks that paved the way for the new generation of converged voice and data networks.

In 2000, Murali founded and became the Chief Technology Officer of Winphoria Networks, which was acquired by Motorola for $200 million in 2003. He then served as VP and general manager of the Winphoria division of Motorola’s Global Telecom Solutions Sector, where he helped raise $54 Million worth of equity in two rounds from Matrix Partners, Norwest Ventures and Northbridge Ventures.

In 2005, he became the CEO and Co-Founder of Veveo, a software company that develops intelligent conversational interfaces for mobile and video devices, and apps that are adaptable to the user's context. He expanded and grew Veveo for 9 years and in 2014 it was acquired by TiVo (formerly Rovi) for over $75M.

In 2015, he founded Nference, which aims to improve clinical outcomes and commercial decisions through a large-scale AI technology platform. He is a technology pioneer having authored 95 US patents and has more than 100 pending patents in the areas of search, personalization, conversational interfaces, data networking, telephony and much more.

Murali Aravamudan, Founder and CEO of Nference discusses the importance and challenges overcome because of Artificial Intelligence in the healthcare sector with Anand Daniel, partner at Accel, in the INSIGHTS series podcast.

"The digitisation of biology and electronic medical care records, coupled with the explosion of scientific literature led me to identify that I could solve meaningful problems of human life."